1. Introduction on how different colours have spiritual effect on us

Through spiritual research, we have found that depending on the colour we choose (be it clothes or our surroundings), we will be affected accordingly at a spiritual level. In this article, we share some of our spiritual research on the many ways colours affect us so that our readers are better equipped to make decisions that will enhance their lives.

2. How different colours affect us spiritually?

The entire Universe, at a subtle intangible level, is made up of three subtle-components of Sattva, Raja and Tama. We have explained this in detail on our website and urge you to familiarise yourself with this concept, so as to gain a better understanding of this article.

Colours are also categorised as sāttvik, rājasik or tāmasik depending on their predominant subtle-components. Sattva stands for ‘spiritual purity’ while Raja and Tama stand for ‘action’ and ‘spiritual ignorance’ respectively. When we wear clothes that are of sattvik colours, it helps us with our spiritual practice, while colours that are Raja-Tama in nature are detrimental towards making spiritual progress. Wearing clothes that have a Raja-Tamapredominance increases the negative spiritual vibrations around us. Hence we are also more likely to attract negative energies as they too are Raja-Tama predominant.

As you can see from the chart above, colours such as white, yellow and blue assist in increasing the spiritual purity around us. The colour black on the other hand, has harmful vibrations which not only attract negative energies but repel any positive spiritual energy. 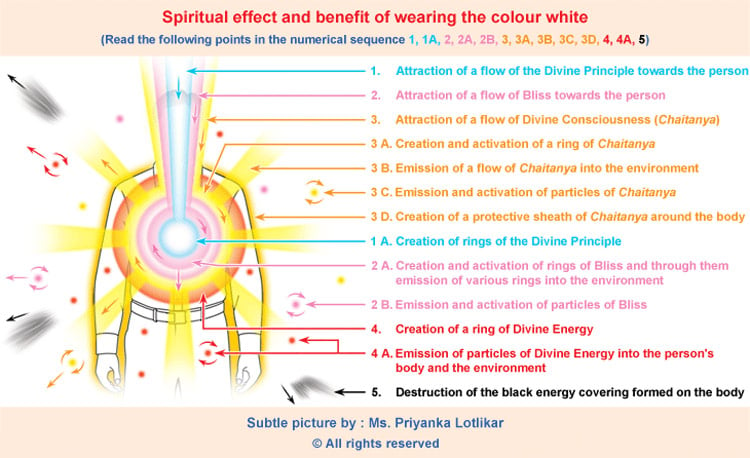 Both drawings based on subtle-knowledge show, in isolation, the subtle-vibrations attracted and emitted by the colours black and white. The final vibrations emitted or attracted by a person is the sum of myriad factors such as spiritual level, personality defects, state of mind at that time, whether negative energies are affecting him, the type and colour of clothes, etc.

At a physical level: A person generally likes a certain colour because it matches his skin tone.

At a psychological level: An individual’s taste or distaste for a certain colour can change with his mood. These mood changes are often situation-based, for example:

At a spiritual level:

Key finding through spiritual research: The trend to wear black formal wear or to wear black in our day-to-day lives has been largely instigated by negative energies which have been and continue to insidiously and subtly influence the minds of people.

The wearing of the colour black affects people in the immediate vicinity too.  If two people are affected by negative energies and they wear black, this only assists in the exchange of subtle black energy between the two negative energies. However if there is a person who is honestly trying to make efforts in his spiritual practice in the area, he too is prone to be adversely affected by the increase in the Tama component due to another person wearing black. This is because negative energies focus their efforts on trying to dissuade people from doing serious and intense spiritual practice.

The colour of clothes should be sattvik: Select sattvik colours such as white, yellow, blue and shades of these colours. There is a 1/1000 part effect of colours on an average person. This seemingly small proportion will in most cases significantly affect a person’s physical and psychological state. Notwithstanding this small proportion, wearing Sattva-Raja predominant clothes benefits a person by either:

If a person likes wearing black, he may look for reasons or excuses to continue wearing black even after reading this article. It is strongly recommended that the use of one’s intellect in this instance will only be detrimental. This is because there is no spiritual upside to wearing black and it can only adversely affect one’s well-being.

Colour of clothes should not be gaudy: Gaudy colours have a greater predominance of the subtle Tamacomponent. An individual wearing clothes with gaudy colours also becomes Tama-predominant over a period of time.

Clothes should be uniform in colour: Clothes with a plain, single spiritual colour, without any print or design are indicative of transparency and hence, are considered more sāttvik from a spiritual viewpoint.

Colours of clothes should be complementary to each other: If a top and a bottom with different colours are to be worn, then the colours should complement each other, that is, they should be compatible with each other to an extent of at least 20 percent. For example, a combination of two sattvik colours is spiritually more appropriate. Below are some examples of sattvik colour pairs: 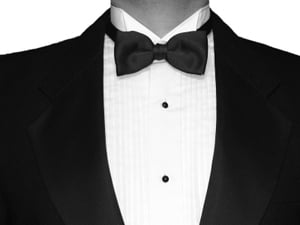 At many formal functions we see people wearing a black and white combination such as a tuxedo. The world sees this type of formal wear as the epitome of elegance and social grace. However at a spiritual level the story is very different. The subtle-vibrations from a very sattvik colour such as white and a very tamasik colour such as black actually fight each other. This fight leads to the creation of distressing vibrations which only increases the possibility of being affected by negative energies. From a spiritual perspective it is therefore not recommended to wear clothes, such as a tuxedo, with a black and white combination.

As a result of a person’s spiritual practice and after attaining a spiritual level of above 60 %, the effect of colours on his mind and intellect is minimal. This effect diminishes as a person’s spiritual level increases. However it can still affect him physically as the body is gross (tangible) and higher level negative energies can easily affect something that is in the physical realm.

We hope this article has provided you with an insight at a practical level to the spiritual effect of colours on your life. The basic rule of thumb to keep in mind is to increase the Sattva component in your life and reduce the Raja-Tama subtle-component in your life. By understanding and putting this spiritual principle into practice and not being swayed by any tamasik trend however popular it may be, will only add a higher level of well-being in your life.

Spiritual Effects of Wearing Different Colours 1. Introduction on how different colours have spiritual effect on us We all make choices on a daily basis with regard to colour. An example is choosing the colour of the clothes that we... ...